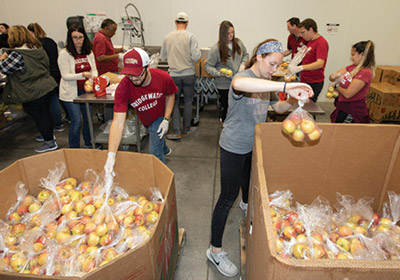 As Bridgewater College senior Eric Poloway grabs two apples in each hand for inspection, junior Makayla Buxton stands ready to his left with a clear plastic bag. Buxton weighs the apples Poloway deems fit for consumption (no bad spots or mushiness), and fills the bag as close as possible to three pounds. Next, she twists the bag, ties it close and deposits it in a giant cardboard box next to their table. Three more pairs from Bridgewater College (students Taylor Sale, Lauren Buckhout, John Hill and Michael Gruver, Director of the Office of Sustainability Teshome Molalenge and Dr. Karie Dornon, Associate Professor of Economics and Business Administration) perform the same weigh-and-bag routine as quickly as possible, while Dr. Jamie Freuh, Director of the Center for Engaged Learning, keeps a steady supply of 42-pound boxes of apples on the conveyer belt. The final team member, BC student Victoria Hudson, breaks down the cardboard apple boxes for recycling.

As part of the Blue Ridge Area Food Bank and Blue Ridge Community College’s 12th annual Virginia Hunger Symposium, held Oct. 22 to 26, six area colleges and universities squared off in a friendly hunger packing challenge today to help those in need. Six teams of up to 10 faculty, staff and students from Bridgewater College, Blue Ridge Community College, Eastern Mennonite University, Piedmont Community College, James Madison University and Mary Baldwin University went head-to-head today at the food bank’s headquarters in Verona. The goal? To see which team could sort, weigh and bag the most apples in an hour. Bridgewater College and Blue Ridge Community College met in the first round of the challenge this morning. The winning team not only goes home with the satisfaction of helping those in need—the winner (announced tomorrow) receives a gold trophy, labeled Hunger Hero Champion, with a topper of a bushel of apples. 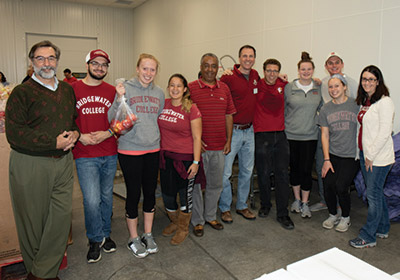 In total, the groups bagged 74,000 pounds of apples—two tractor-trailer loads—to be distributed in the next few weeks at the food bank’s mobile pantries and partner agencies. The Blue Ridge Area Food Bank serves 106,000 people in 25 counties and eight cities each month. According to Abena Foreman-Trice, the food bank’s director of communications, fall marks the start of the food bank’s “peak season,” when its clients start seeing higher heating bills.

Molalenge, who helped organize the team of faculty, staff and students, says they love bringing students to the food bank to engage them in helping the community combat hunger.

“I really like that it was a competition, but also helping people out,” says Buxton.

Poloway loved the intensity of the competition as he toggled between several rolls of sorting apples, evenly distributing bags between the near-overflowing bins and breaking down cardboard boxes.

“We’re really grateful,” he said. “There are 106,000 people who depend on us each month, and half of those are area children and seniors. Health issues are a really big concern among people who don’t have enough to eat.”