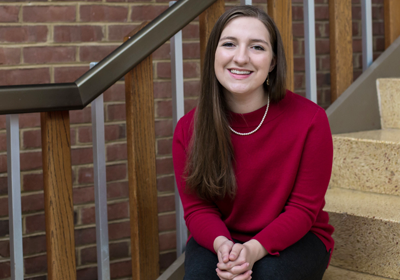 When Emily Morris turned 9 years old, she received a Canon camera. It took her less than a year to wear out the small, basic camera—a direct result of taking so many pictures.

When Emily Morris turned 9 years old, she received her dream gift—a Canon camera. It took her less than a year to wear out the small, basic camera—a direct result of taking so many pictures.

Making wise use of her first “clients,” who were her young cousins, she had them doing photo shoots whenever she saw them.

“I also photographed my friends on a regular basis, and again, I made them do actual photo shoots, in which they would pose,” noted Emily.

That basic camera was replaced with another one and, later, Emily progressed to a Canon Rebel.

Taking an elective photography class in middle school was a first step in taking her photography skills to the next level.

“Other than that, everything was self-taught by watching videos on YouTube, reading photography blogs and asking other photographers questions,” Emily said.

In 2011, she began advertising and developed a Facebook page for her business—aptly titled Emily Morris Photography. She is working on developing a business website.

Emily’s business picked up when as a high-school student she photographed her peers’ senior portraits.

She expanded her business to include photo shoots for engaged couples, newborns and college graduation photos.

“Being able to share a couple’s story through the progression from engagement to wedding to maternity photos was really cool,” she said.

Recently Emily upgraded her camera and has added weddings to her list of photo services, as well as wedding videos. To assist with the wedding photography, she hired a second shooter.

Emily’s mom is also an important member of her team—going to all of the photo shoots and carrying equipment are a few of her duties. She also gives advice on posing and assists in helping the clients feel at ease. All while providing support and encouragement.

Emily speaks Spanish fluently and provides photography services to members of the community who speak Spanish as their native tongue. Getting requests for photo shoots from Spanish-speaking clients has aided in boosting her business.

One of Emily’s professors had a family visit from Paraguay and, while they were in the Shenandoah Valley, she did a photo shoot with them.

“It was nice to give instructions to them as well,” she commented.

The process begins when Emily is contacted by a potential client. The initial contact is followed by either a phone or in-person consultation in which they discuss client expectations, location(s), what they plan to wear, wardrobe changes and a signed contract.

Emily then visits the location to make sure it is conducive to photos. She also envisions what she wants to do with the photo shoot and how she can incorporate creativity in obtaining the shots she desires.

Then comes the actual shoot.

“I try to make my clients feel as at ease as possible. Getting your picture taken can sometimes be uncomfortable, so I try to be calm and reassuring during the process,” said Emily.

Editing the photographs she has taken at the shoot, Emily uses Adobe Lightroom to tweak elements and/or make enhancements to obtain the particular feel she is striving for.

According to Emily, minor adjustments—such as removing blemishes—are made in Adobe Photoshop. “I am careful not to change a person’s appearance,” she noted. “I think everyone is beautiful and any edits I make should uphold each individual’s authentic look.”

All of her hard work pays off when Emily provides her clients with a digital file along with a print release.

Although the process may be tedious and time intensive, Emily enjoys the editing process.

“If there is a lot to edit, it takes a long time,” she noted. “It’s hard sitting for so long, but I love the final product.”

Emily says that there are benefits to owning your own business.

“It is really rewarding to be able to earn money doing something that I really enjoy,” she said, “but more than that to be able to create something meaningful for people that they are going to have for years to look back on.”

Emily said an unexpected surprise has been the relationships that she has made in the process. Clients who have been referred to her by friends have now become some of her best friends as well.

“That’s really nice to be able to build those relationships,” commented Emily.

One of the most difficult things that Emily faces as a business owner is being young and having people take her work seriously.

“A lot of my clients are either friends or friends of friends, so the hardest part is pricing,” she noted. “Perhaps people don’t see the value or all the work that goes into it.”

Emily became intrigued with Brandon Stanton’s book, Humans of New York, in which he took photos of people on the streets of New York City and then shared snippets of their lives.

She has been using the same concept to feature Humans of Bridgewater. With the aid of her camera, she focuses on telling the stories of people living in the Bridgewater community.

“I want to make people aware of differences and similarities, to humanize groups who sometimes get marginalized,” Emily said. Her goal is to create a more connected, integrated and understanding community through the stories of people who live in the area.

Emily, along with four other students, participated as a team in the inaugural Showker Prize competition during the 2016-17 academic year. The main focus of the team’s initiative was “The Community Connection Center for New Americans” and their goal was to connect refugees (new Americans) to community resources, as well as to connect community members with refugees.

One way the team assisted in making those connections was via storytelling. Emily interviewed refugees in the local Bridgewater community and their stories are published on the Community Connection Center for New Americans website https://wp.bridgewater.edu/cccfornewamericans/

Following graduation from Bridgewater College, Emily plans on teaching, as one of her scholarships is from the Virginia Department of Education and is contingent on her teaching in Virginia for one year.

Once she has fulfilled that commitment, Emily has her sights set on either going to graduate school or teaching abroad.