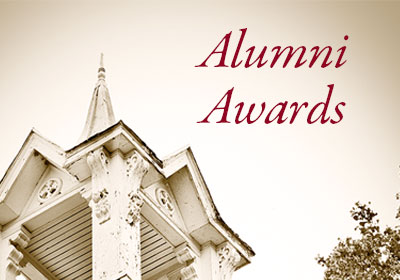 Bridgewater College has honored four alumni for their achievements and humanitarian service.

Bridgewater College has honored four alumni for their achievements and humanitarian service.

Caballero-Moersfelder’s humanitarian work has been extensive. She has been program coordinator for the Uplifting Angels program of Angel On My Shoulder, which furthers the well-being of those affected by cancer. She has also donated her time and energies as a board member to Mosaic House, evaluating and implementing domestic abuse prevention programs for clients.

Her community work also included serving as a program advisory committee member at Healing Hearts of Waukesha County; a volunteer psychotherapist for Waukesha Catholic Charities; a community support volunteer for St. Joseph Parish where she currently helps with the Spanish-speaking retreat for women; and a member of the Waukesha Collaborative Network, which helps the Latino community with all aspects involved in the needs of daily living.

Caballero-Moersfelder is employed as a licensed professional counselor and a bilingual psychotherapist for the Sixteenth Street Community Health Centers—Waukesha Site, where she works with people who are underprivileged, homeless people, victims of domestic abuse, the elderly, immigrants and those who are uninsured and underinsured.

Caballero-Moersfelder was recognized as the Mental Health Professional of the Year by the National Alliance on Mental Health for “going above and beyond the call of duty to help individuals whose care she is involved with.”

At Longwood University, she has served as faculty representative to the Board of Visitors and was honored in 2015 with the Maria Bristow Starke Faculty Excellence Award.

She is the author of numerous journal articles and three books, Leverage Your Library Program to Help Raise Test Scores (Linworth, 2003), Your Library Goes Virtual (Linworth, 2007), and Tapping into the Skills of 21st-Century School Librarians: A Concise Handbook for Administrators (Rowman & Littlefield, 2016) and is a frequent presenter at state and national conferences.

Garrison is currently a lecturer in information studies at Charles Sturt University in Wagga Wagga, Australia.

From 2005 to 2009, Garrison worked in the Virginia Beach and Norfolk, Va., public school systems, mostly as a special education teaching assistant and school library media specialist. Over the next few years, while studying for her doctorate, she also worked as a graduate teaching assistant instructor in the Darden College of Education’s Department of Teaching and Learning, at Old Dominion University and an online course developer and adjunct instructor at McDaniel College in Westminster, Md.

In addition to committee work and service at Charles Sturt University, Garrison is involved in a variety of collaborative and independent research projects with her colleagues and doctoral students she is supervising.

During World War II, Miller entered the U.S. Army as a private and rose to the rank of captain. His unit – the 310th Combat Engineers, 85th Infantry Division­ – saw fierce action in Italy. For his conduct under enemy fire on May 13, 1944, Miller was awarded the Silver Star for gallantry. In April 1944, in the Po River Valley campaign (considered the third-most-costly battle of the 20th century, Miller earned a Bronze Star for meritorious service.

After the war, Miller pursued postgraduate work in agricultural education at Virginia Tech. He worked at Southern States Cooperative until September 1946 when he accepted a job at Linville-Edom High School teaching vocational agriculture and coaching basketball and baseball. In 1947, he married Peggy Wright, a 1947 graduate of Bridgewater College. They had five children, all of whom graduated from Bridgewater.

In 1952 Miller was elected Commissioner of the Revenue for Rockingham County. In 1957, Dr. Warren D. Bowman, president of Bridgewater College, offered him a job as business manager and treasurer.

When Miller started at Bridgewater, there were 30 buildings on campus. Over the next 25 years, 10 were torn down and 26 were built. All the work of purchasing and equipping the facilities was handled through Miller’s office, which during his tenure processed more than $9 million in capital expenditures.

Miller retired from the College in 1983.