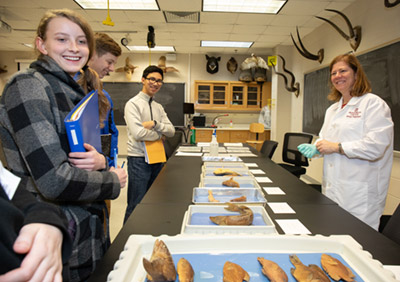 Bridgewater College biology professors volunteered their time, classrooms and knowledge yesterday afternoon to help students from two Augusta County high schools prepare for the local Envirothon competition in April. Envirothon is a nationwide, team-based competition that focuses on forestry, wildlife, aquatics, soil and a special topic (this year’s is technology to feed the world). The winning local team moves on to regionals, followed by the state and ultimately North American competitions.

“Professors have volunteered their time to give the students some more hands-on activities, because a lot of the students don’t have access to the specimens or tree branches that the wildlife professors have,” McCuller said. “This is an opportunity for them to study and prepare.”

Dr. Edgar Lickey, Associate Professor of Biology, led students past tables displaying twigs and preserved leaves to teach them about identifying different tree species. One group of students correctly identified the eastern redbud, honey locust, black locust, black walnut and hickory trees, while Lickey gave them identification tips, such as how to identify a tree by its twig.

“To see them in a picture is great, but when you get them in front of you it’s really different,” Kreps told one group.

Bolyard showed students trays of fishes and pointed out key characteristics of each species (such as an adipose fin), to help students identify them.

Dr. Tamara Johnstone-Yellin, Associate Professor of Biology and Dr. Robyn Puffenbarger, Associate Professor and Department Chair of Biology, oversaw the wildlife classroom. While Puffenbarger talked with two students about the molting cycle of the goldfinch, three students admired a hummingbird. One student held up the bird carefully while another snapped a picture on her cell phone. Across the room, Johnstone-Yellin taught a group of students how to spot the differences in the skulls of an elk and a white-tailed deer.

Brent Hull ’93, a science teacher at Fort Defiance High School, has been coaching the school’s Envirothon team since 2001. Under Hull’s guidance, the team has won the state Envirothon competition 10 times and placed high in the North American competition—even winning it in 2006. Hull said he was excited that this year’s Envirothon workshop took place at his alma mater.

“I know a lot of this, but I’ve learned something from each one,” he said about the afternoon sessions.