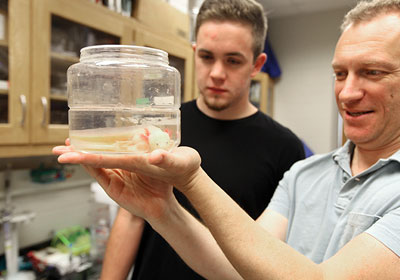 A total of $59,000 in funding for faculty-student summer research projects has been awarded to 17 Bridgewater College students who will live and work at the college throughout the summer.

A total of $59,000 in funding for faculty-student summer research projects has been awarded to 17 Bridgewater College students who will live and work at the college throughout the summer.

Funding was provided by the Dr. John Martin Summer Science Research Institute and The Research Experience @ Bridgewater. The awards, plus free housing on campus for the summer, enable students to devote their summers to research and exploration on a wide variety of projects.

“Undergraduate research experience has become nearly essential for entering graduate school,” said Dr. James Josefson, director of the Wade Institute for Teaching and Learning. “When they present their own project at a professional conference, they learn that they can compete with the best students anywhere. Our students develop skills, knowledge, creativity and initiative that they can communicate to an employer or graduate program. It’s that ability to reflect upon and communicate about learning that has been the hallmark of a Bridgewater College education.”

The Dr. John Martin Summer Science Research Institute is named for one of Bridgewater’s most beloved professors, who taught in the chemistry department from 1961 until his retirement in 1985.

The Research Experience @ Bridgewater is a donor-funded initiative providing support for teams of Bridgewater faculty and undergraduate students to spend the summer in collaborative research and creative, scholarly work in any discipline.

Research Experience @ Bridgewater awards were made for the following projects: