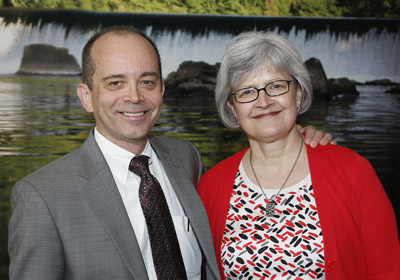 Aubrey and Esther Knight, who received the West-Whitelow Award for Humanitarian Service from the College in 2013, were inspired to start My Father’s House International, a nonprofit ministry, after a medical mission trip to San Salvador.

Knight was a family physician in Salem, Va., when he began leading yearly medical missions to Bolivia in the early 1990s. A rise in airfares during the summer of 2002, however, resulted in a change of plans: Instead of heading to Bolivia, Knight’s team went to San Salvador, El Salvador, where they provided medical care for a group of children living in a startup orphanage, La Casa de mi Padre.

It was supposed to be a one-time deal, with plans to resume trips to Bolivia after this mission.

“But we fell in love with the country, with the ministry and with the children,” said Knight, now the Senior Dean for Student Affairs and a professor of family and community medicine at the Virginia Tech Carilion School of Medicine.

Knight believed this ministry could have a bold impact, but he believed its operational model wasn’t self-sustaining. He wanted to promote awareness and provide financial support. At the time, he was serving on the board of directors for an unrelated missions program and was able to obtain donations for La Casa de mi Padre through that organization. That was only meant to be a short-term solution.

“The Lord impressed upon our hearts that we needed to do more,” Knight said. “We needed a better solution to get the word out [about La Casa de mi Padre] and to raise funds.”

In 2004, Knight and his wife, Esther Elswick Knight ’78, established a nonprofit ministry, My Father’s House International, to support the orphanage. In the early years, the overriding mission was simply to provide a safe haven and basic care for San Salvador’s children in crisis.

Over time, however, the organization’s focus has evolved and expanded. Many of the children living at La Casa de mi Padre have parents or other family members who abandoned them—typically because of poverty and lack of education. An important piece of the ministry today is trying to reconcile the families and break the generational cycles of shattered relationships.

“It’s about showing Christ’s love through the care we provide for them,” Knight said.

For Esther, one of the rewards has been forming relationships with the children and watching them grow up to have productive lives.

“Many [of these kids] are choosing service-oriented professions, such as social work and education, and one is planning to be a missionary,” said Esther, senior thesis coordinator and humanities teacher at Faith Christian School in Roanoke, Va. “They have seen the importance of those services in their own lives, and they want to give back to their communities. It’s amazing to see those young people stepping up and becoming leaders.”

Bridgewater College has been central to the couple’s life together: They met on the first day of their time at the College, during first-year orientation. They married before their junior year. The couple’s children, Emily Knight Wilson ’05 and Justin Knight ’08, have been involved in the work of My Father’s House International as well. The entire family received the West-Whitelow Award for Humanitarian Service from the College in 2013.

“Bridgewater is so ingrained in us, and so much a part of who we are,” Knight said. “The College helped me to recognize the value and the responsibility to serve. Every bit of my entire [life] experience has led to who I am today. It’s my family, the communities I’ve lived in, the educational institutions that are part of me—and a big part of that is Bridgewater College.”